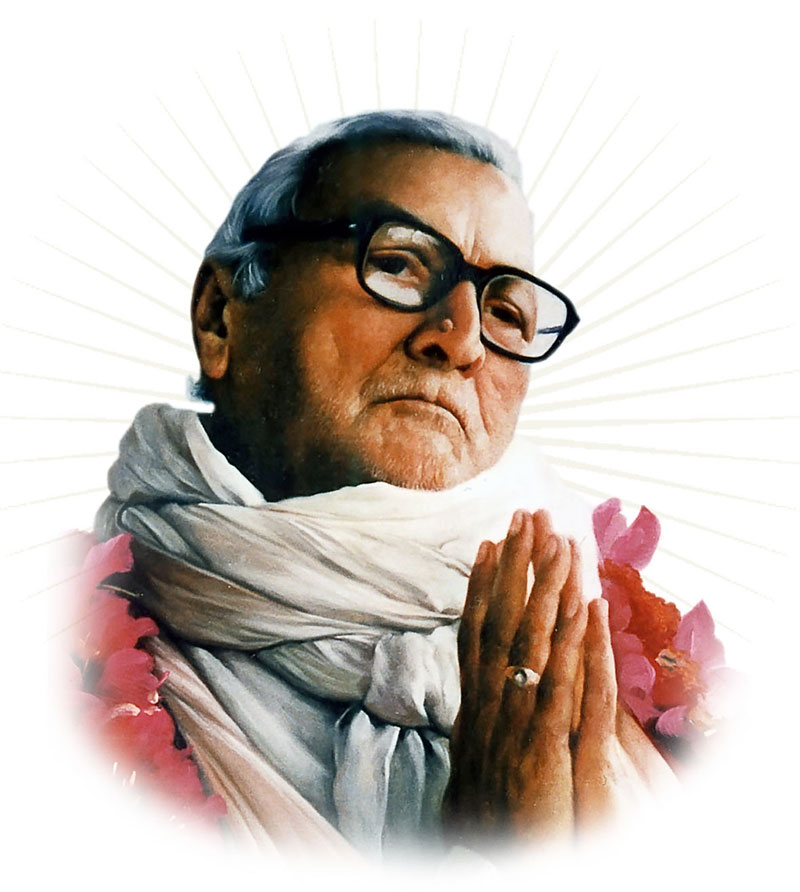 Having taken his pious birth in Sri Gauda-Mandal, the holy lands where Sri Chaitanya Mahaprabhu exhibited His divine pastimes on this earth, Srila Sridhar Maharaj, from his very childhood, had a natural affinity for the mission of Sri Chaitanya Sankirtan — the Grand Congregational Chanting of the Holy Names of the Supreme Lord.

As a prominent preacher in the Sri Gaudiya Math mission, he travelled extensively throughout India and preached fluently in Bengali, Hindi, Sanskrit, and English, spreading the teachings of Sri Chaitanya Mahaprabhu on many levels in universities, public seminars, and Sankirtan festivals.

Srila Bhakti Siddhanta Saraswati Prabhupad also expressed high appreciation of Srila Sridhar Maharaj’s Sanskrit composition, Sri Bhaktivinoda Viraha Dasakam, considering it an omen of assurance that the grand ideals and dignity of the Sri Gaudiya Sampradaya would be perfectly upheld and preached by such a learned and sensitive devotee as Srila Sridhar Maharaj.
As a testimony to this fact, just prior to Srila Bhakti Siddhanta Saraswati Thakur Prabhupad’s departure from this mortal world, Srila Prabhupad had Srila Sridhar Maharaj sing, in his presence, the holy prayer most venerated by the entire Sri Gaudiya Vaishnava community, Sri Rupa Manjari Pada.

After the passing of Srila Bhakti Siddhanta Saraswati Thakur Goswami Prabhupad, Srila Sridhar Maharaj’s Godbrothers, associates, and the public, naturally revered him as the senior-most representative of the Sri Gaudiya Sampradaya, although Srila Sridhar Maharaj himself was more inclined to anonymity as a humble Vaishnava. Nonetheless, by the call of divine duty and divine inspiration, he established the Sri Chaitanya Saraswat Math at Sri Nabadwip Dham, hinting in a short Sanskrit poem that the Math — as a sanctuary where the holy message of his Gurudev, Sri Rupa, and Sri Chaitanya Mahaprabhu was preached — would inevitably become renowned throughout the world amongst the sincere and pious seekers of Unalloyed Truth and Divinity.

Srila Sridhar Maharaj is the composer of numerous classical prayers and commentaries in Sanskrit and Bengali. His works are hailed as gems of pure Vaishnavism by scholars, philosophers, and devotees worldwide. He authored Sri Sri Prapanna Jivanamrtam, a Sanskrit devotional treatise on the subject of divine surrender, which has become a standard text-book for devotees everywhere.
Upon reaching his eighties, not only Indians, but persons from America, Europe, and the world over, became attracted by Srila Sridhar Maharaj’s teachings and personality. He was known as a pure saint of the most simple living habits. He was respected and loved for his saintly simplicity, and his affectionate nature and dealings. He was revered by his Godbrothers, disciples, other devotees, and the general public, and was unanimously venerated for his formidable encyclopedic command of the revealed scriptures, and his unique and unprecedented style of casting newer and newer light upon the most internal philosophical and revelatory purports of pure Sri Gaudiya Vaishnava Siddhanta.

A vast library of Srila Sridhar Maharaj’s taped discourses has been compiled by his disciples, and from such recordings, the exquisite English books — Search for Sri Krishna, Sri Guru and His Grace, The Golden Volcano of Divine Love, Loving Search for the Lost Servant, and Srila Sridhar Maharaj’s unique commentary and interpretation of “Srimad Bhagavad Gita: The Hidden Treasure of the Sweet Absolute” — and many other books have been published. Many more publications are also anticipated.

On August 12th, 1988, His Divine Grace Srila Bhakti Rakshak Sridhar Dev-Goswami Maharaj departed from this world, to enter into his eternal pastimes. His departure did not herald the departure of one of the great stars of the Sri Gaudiya Vaishnava firmament, but that of the moon itself. Even the Earth herself trembled on two occasions, forecasting and punctuating the event. A divine temple, “The Temple of Union in Separation,” was erected at his holy shrine at Sri Chaitanya Saraswat Math, Nabadwip, and worship will continue throughout the generations.