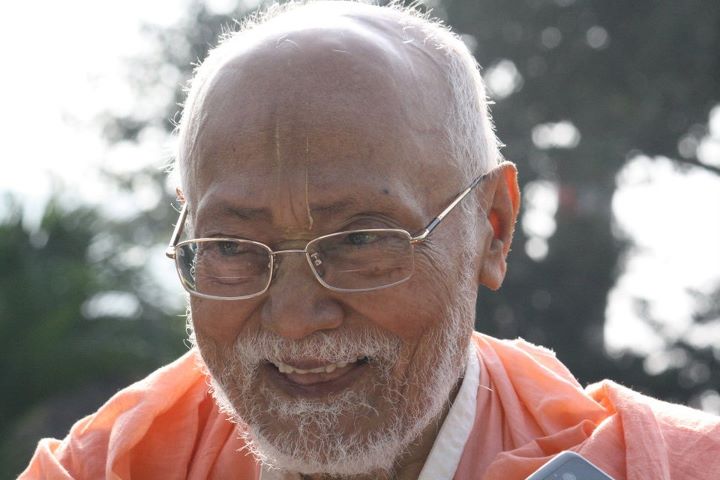 His Divine Grace Bhakti Ballabh Tirtha Goswami Maharaja appeared in 1924 in Assam, India, on Rama-Navami, the most auspicious appearance day of the Supreme Lord Krishna in His form as Ramachandra. From his childhood, he had a natural attraction to and affinity for spirituality. Having been brought up in a pious environment, he developed a strong inclination to search for the ultimate goal of life and began to spend the majority of his time in meditation. Consequently, indifference to the material world developed and he became acutely aware of the non-eternal nature of the material world. He realized that one day his mother, father, brother, sister and all others would be gone. . Everything would be finished. This manifestation of the path of self-realization led him to take up the study of philosophy at Calcutta University. His fellow students at the university invariably noted his outstanding qualities of nobleness, truthfulness, benevolence and non-enviousness.

Taking Shelter of the Divine Master

While studying at the university, he came in contact with his spiritual master, His Divine Grace Srila Bhakti Dayita Madhava Goswami Maharaj, and immediately became attracted by his transcendentally powerful personality. Srila Madhava Maharaja was one of the leading followers of the illustrious preceptor of the pure devotional bhakti school, His Divine Grace Prabhupada Srila Bhaktisiddhanta Saraswati Thakur, and a great proponent of the devotional teachings in his own right After completing his Masters Degree in Philosophy in 1947, Srila Tirtha Maharaja wholeheartedly and unreservedly dedicated his life to the service of his spiritual master.

He travelled extensively with Srila Madhava Maharaja on preaching tours. His service attitude was so exemplary that soon Srila Madhava Maharaja established him as the secretary of the devotional institution known as Sree Chaitanya Gaudiya Matha, which has over twenty ashramas (monasteries) in India alone. He was awarded sannyasa, the order of renunciation, in 1961. Setting an example of unadulterated service to Sri Guru, Srila Tirtha Maharaj served his spiritual master with every facet of mind, body and spirit.

An Ideal Acharya (one who teaches by example)

For the last five decades, Srila Tirtha Maharaja has been engaged in the propagation of the all-embracing doctrine of transcendental Divine Love of Sri Chaitanya Mahaprabhu to counter the present trend of violence and cruelty, and to bring about unity of hearts among all, irrespective of caste, creed or religion. “Example is better than precept” is his way of preaching. He has always practiced what he preaches—compassion toward all living entities, true kindness, simplicity, innocence, complete detachment, absolute tolerance, intense spiritual blissfulness, an incomparable degree of humility and unflinching faith in Sri Guru combined with exclusive devotion and complete surrender to Sri Chaitanya Mahaprabhu. Srila Tirtha Maharaja is known for not deviating even one inch outside of the four corners of the prescripts of the Holy Scriptures. His Divine Grace is a renowned authority on Gaudiya Vaishnava philosophy and he is beloved by thousands of devotees throughout the world as the very embodiment of humility and spiritual affection.

Now at the age of 84, inspired by the grace of his Gurudeva, Srila Tirtha Maharaja is always on the move, going from towns to villages in India and also abroad, propagating the divine message of the Bhagavad Gita and the Srimad Bhagavatam. Without caring for his ownpersonal comfort and undergoing many austerities, he maintains an extremely heavy preaching schedule, tirelessly serving the mission of Sri Chaitanya Mahaprabhu.

It could in fact be said that Srila Bhakti Ballabh Tirtha Maharaja is the very personification of all desirable and rare attributes such as: humility, affection, purity of heart and exclusive devotion. Because of these qualities and the mercy of his guru, His Divine Grace Srila Bhakti Ballabh Tirtha Goswami Maharaja is the present President-Acharya of the Sri Chaitanya Gaudiya Math devotional institution and also the Founder-Acharya of GOKUL (Global Organisation of Krishnachaitanya’s Universal Love). He also serves as president of the World Vaishnava Association (WVA) and is acknowledged by Vaishnavas around the world as one of the most exalted spiritual personalities of his generation.

Srila A.C. Bhaktivedanta Swami Maharaja requested Srila Tirtha Maharaja to accompany him to the US just prior to his launching of the Hare Krishna Movement in the West in 1965. As he was, at that time engaged in the service of his spiritual master, Srila Madhava Maharaja, with many duties and responsibilities, Srila Tirtha Maharaja humbly declined.

Eventually, with the idea of Srila Tirtha Maharaja traveling outside India to propagate the all-embracing gospel of transcendental Divine Love of Sri Chaitanya Maharaprabhu, his Gurudeva Srila Madhava Maharaja ordered him to take lessons in the German language. It was several years after the disappearance of his most revered Gurudeva and due to constant and persistent requests of devotees, that Srila Tirtha Maharaja approached Srila Bhakti Promode Puri Goswami Maharaja, who is one of the foremost associates of Srila Bhaktisiddhanta Saraswati Goswami Prabhupada, for guidance regarding travel to the west. At the behest of his beloved shiksha-guru(instructing preceptor), His Divine Grace Srila Bhakti Promode Puri Goswami Maharaja, he then embarked upon preaching the message of Sri Chaitanya Mahaprabhu throughout the world, beginning with an America in 1997. Since that time, he has continued to disseminate the remedy for the afflictions of the current age quarrel, the chanting of the Holy Name, throughout the world. To date, his preaching engagements have taken him to 25 countries including England, Holland, Italy, Austria, Germany, France, Russia and throughout the length and breadth of the continental USA.

Srila Tirtha Maharaja, during his US tour in 1997, addressed the United Nations “World Conference On Religion and Peace and World Peace Prayer Society” in New York city, offering them a succinct outline for world peace based upon the spiritual tenets of the ancient Vedas. All participating in these meetings were very much taken by Maharaja’s sweet and humble personality, and regarded him as a genuine holy man. His preaching programs over the past years have also included many interesting dialogues with prominent Catholic, Protestant, Jewish, Muslim and Baha’i theologians, in such diverse settings as universities, interfaith groups, churches, Hindu temples and a wide variety of metaphysical and private educational centers. All are invariably won over by his gentle and affectionate nature, combined with his resolute faith in Guru-Vaishnava-Bhagavan. He has also spoken on the sublime teachings of Sri Chaitanya Mahaprabhu on many radio and television programs, including a thought-provoking interview on BBC radio in 2000, which was broadcast worldwide. Srila Bhakti Ballabha Tirtha Goswami Maharaja, in lieu of a request by the devotees worldwide, gave his approval for the establishment of GOKUL (Global Organisation of Krishna Chaitanya’s Universal Love), which he founded in 1997 with the goal of expanding his preaching mission.

Srila Tirtha Maharaja’s knowledge of scripture is formidable. He substantiates everything he says with innumerable evidences from all over the Vedic literature. He always preaches fearlessly and never compromises the conclusions of the scriptures for the sake of mundane practicality. During his devotional, powerful, informative, heart piercing lectures, he inspires numerous devotees. He uses every moment of every day to fulfill Sri Chaitanya Mahaprabhu’s desire to preach the Holy Name of Krishna in every town and village. He is the perfect example of the famous and oft-quoted verse “trnad api sunichena” from Sri Chaitanya Mahaprabhu’s Shikshastaka Prayers. Although very meek and humble in his personal dealings, in his classes he roars like a lion, smashing false pride and cutting all misconceptions from the hearts and minds of his disciples and followers.

Srila Tirtha Maharaja adroitly dispels the doubts of those who come to him for shelter and spiritual guidance. He places great stress on chanting of the Holy Name without offense, encouraging and inspiring all to achieve the pure stage. He practices and preaches complete surrender, not partial or conditional, but complete one hundred percent surrender to the instructions of his spiritual master, Sri Gurudeva.

His Divine Grace is always engaged in writing articles and books of a profoundly spiritual nature in several native languages as well as English, for the eternal benefit of the conditioned souls of the world. Many of his writings are in the Bengali language but have been, and continue to be, translated into many other languages. As far as spiritual content is concerned, Srila Tirtha Maharaja leaves no stone unturned. It would not be exaggerating to say that all bona-fide spiritual questions are answered with each turn of the page. His is the accumulated devotion, knowledge and wisdom of many generations of self-realized souls extending back through time without deviation from truth due to self-interest.