Śrī Viśwanāth Chakravarty Ṭhākur, in his commentary, has given a clue to the bona fide neophyte aspirants to recognize guru by one external quality—a bona fide guru is not subdued by passions— anger, greed etc. Of course, a realized soul can use the passions for the service of the Supreme Lord and for the eternal benefit of conditioned souls, but he can never be subjugated by them.

Refrain from various thoughts of this world, rise up, and reinstate your actual self by giving up all non-eternal desires. Sincerely endeavor to realize God by the grace of saintly persons (realized souls). This world is like a sharp razor and very difficult to cross over. There is no way to get deliverance from worldly bondage without taking absolute shelter of a bona fide Guru to worship God. This is the advice of realized souls. As a diseased person cannot treat himself, he has to take the help of an experienced doctor. The doctor, after examination, will diagnose the disease and prescribe medicine and appropriate diet. If the diagnosis is correct, the patient will recover from the disease. Similarly, the malady of births and deaths and threefold afflictions cannot be removed by human efforts. It is essential to take shelter of a bona fide guru—bona fide spiritual doctor. An experienced doctor is capable of treating the patient but a doctor in name, without experience, cannot treat the patient. So-called gurus, so-called sādhus, cannot have the capacity to treat the disease of enslaved jīvas—embodied souls.

Mahādeva’s instruction to Pārvati—‘There may be many so-called gurus in this world to squeeze money from disciples, but a bona fide guru who can remove the drawbacks and sufferings of disciples is very rare.’

If we want quality, we cannot get quantity. If we are keen to increase quantity, we shall have to sacrifice quality. Who is a bona fide guru? What are the characteristics of a bona fide guru? Prabuddha Muni’s instructions in regard to this –– 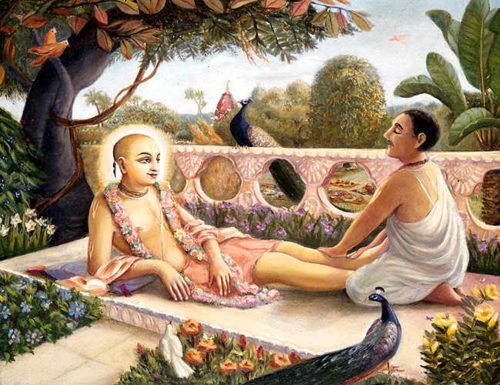 ‘Therefore, enquire from Gurudeva about the best eternal welfare with complete submission to him. A bona fide guru is endowed with two special qualities : 1) He is well-versed in authentic scriptures and 2) has realization of Divinity.’

Śrīla Viśwanāth Chakravarty, in his commentary to this verse, explained the characteristics of a bona fide guru . Gurudeva should be well-versed in the Vedas and other allied scriptures. An aspirant disciple cannot progress in his worship of God without taking shelter of a truly qualified bona fide guru, who should have the capacity of removing the doubts of disciples by reasoning substantiated with evidence from authentic scriptures. If Gurudeva is incapable of removing the doubts of the disciple, the disciple’s belief in him may slacken. The second characteristic of Gurudeva is that he should have realization of the divinity. Only by theoretical knowledge of the scriptures, without having practical realization, the spiritual guide cannot give proper advice and direction in accordance with the eligibility of the disciple. By the instruction of a guru, possessing the quality of practical realization, the disciple can have actual spiritual progress. It is to be considered here that a disciple can have the capacity to comprehend scriptural knowledge of Gurudeva by hearing from him; but how can a disciple understand whether Gurudeva has got realization of divinity or not? The Supreme Lord is transcendental reality; His absolute counterpart Gurudeva is also transcendental. Therefore, a neophyte votary cannot understand Gurudeva’s realization of divinity by his own endeavor.

There are two aspects of the Supreme Lord and His absolute counterpart Gurudeva—(1) morphological aspect and (2) ontological aspect. Conditioned souls can, by their mind, intellect and sense-organs, grasp the morphological, i.e. the external aspect of the thing—the thing as it appears—but not the thing as it is. The thing as it is can be realized only by the grace of transcendental realities, through unconditional complete surrender. As for example the self-luminous sun can only be known by its own light and not by the help of other lights. We cannot see the sun in the night with the help of other lights, but when the sun rises, by accepting the grace of the sun—its light—we can see the sun and all things of this world in the proper perspective. The Supreme Lord and His Absolute Counterpart Gurudeva are self-effulgent. Śrī Viśwanāth Chakravarty Ṭhākur, in his commentary, has given a clue to the bona fide neophyte aspirants to recognize guru by one external quality—a bona fide guru is not subdued by passions— anger, greed etc. Of course, a realized soul can use the passions for the service of the Supreme Lord and for the eternal benefit of conditioned souls, but he can never be subjugated by them. Śrī Narottam Ṭhākur has advised us how the cardinal passions, except for malice, can be used for the service of Śrī Krishna—

Kāma—passion for fulfillment of desires should be diverted towards desire to serve Śrī Krishna, ‘anger’ should be used against those who are hostile to devotees, ‘greed’ should be employed to increase the desire to hear Hari katha from a bona fide sādhu, “infatuation” should be about not being able to utilise the valuable time of this precious human birth for worship of Śrī Krishna up till now and “madness” should be after singing the glories of Śrī Krishna. Even Nārada Goswāmi, out of compassion, used anger on the sons of Kuber—Nalkuber and Maṇigriva—to rescue them. According to the Gītā, the cause of anger is obstruction to fulfillment of one’s desire. A real devotee cannot have any desire of his own except service of Śrī Krishna. So, in a pure devotee, there cannot be any possibility of the origination of such anger due to hindrance to worldly desires.

It is essential for the votary to submit to Gurudeva wholeheartedly with words, mind, sense-organs and everything for realization of divinity. Evidence from Muṇḍaka Śṛti:-

‘A brāhmin should have the knowledge that the fruits of karma are non-eternal and that eternal reality cannot be attained by karma. As such a brāhmin has no attachment to karma and therefore he takes absolute shelter at the lotus feet of a bona fide guru.’

Two characteristics of a bona fide guru are mentioned in Muṇḍaka Śṛti— “śrotriyaṁ” and “brahma-niṣṭham”. Interpretations of the word śrotriyaṁ : (1) Well-versed in śṛti sāstras—the Vedas and other allied scriptures and (2) blessed by the descent of the Divine knowledge through preceptorial channel. brahma-niṣṭham means firmly fixed in Brahman.